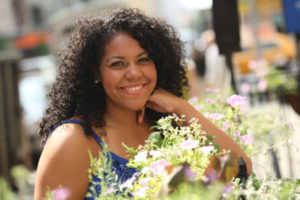 GABBY WRIGHT started dancing at the age of three and hasn't stopped since! She lived in New York City for 6 years where she earned a Business Degree with a concentration in Media and Arts Management from Marymount Manhattan College. In addition to dancing on the Marymount stage, she has had the pleasure of performing with the Opus 2 Contemporary Company, Koresh School of Dance, on stages in Disney World, at the Premiere of Happy Feet the movie, and at the International Emmys. Gabby also spent a year as a member of the dance squad with the Philadelphia SOUL, a professional arena football team. She has trained at Broadway Dance Center and under many professionals including Shelia Barker, Derek Mitchell, and Luam. Gabby recently finished touring with both New York City Dance Alliance and Onstage New York, dance competitions. Most recently she performed in New York City's Times Square as part of a group sponsored by Turkic Platform, an NGO based in Istanbul, to promote a campaign aimed at reconciling Turkish and Armenian relations over the next one hundred years. Gabby has won many awards for her ability to entertain and loves to teach new students how to be the best dancer they can be while helping them harness and express their individuality!